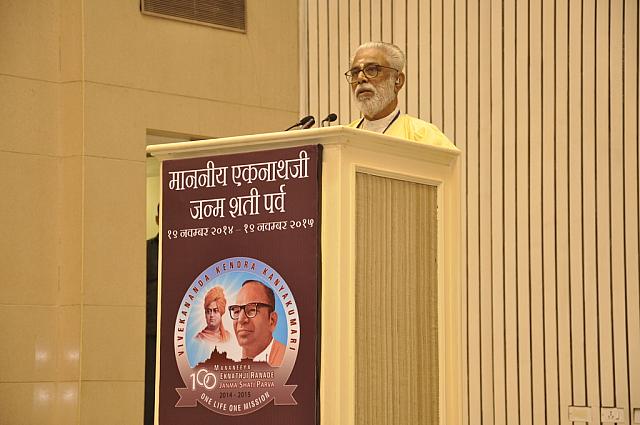 On the occasion of the Inauguration of the Vigyan Bhavan Bus Stop, Maulana Azad Road, South Block, Man Singh Road Area, New Delhi, Delhi 110001, IndiaJanma Shati Parva of Swargeeya Eknathji Ranade, the spirit behind the Vivekananda Rock Memorial and Vivekananda Kendra Kanyakumari. I, on behalf of Kendra offer our heartiest Pranams to all the leading and enlightened personalities assembled in this Vigyan Bhawan auditorium.

Sisters and brothers; it is needless to stress here that many of you in the audience had occasion to work with Eknathji while he was a Sangha Adikari or when he had taken up the work of construction of Vivekananda Rock Memorial at Kanyakumari.

I have been asked to say a few words about my association and experience while working with him. I consider it a great honour that I worked under him for nine years. Eknathji was a multifaceted personality and it is very difficult to say which facet of his life was more bright and colourful. But it was a life full of challenges and achievements.

Belonging to a very humble family, facing all problems and hardships from his childhood days, he rose to extraordinary heights. His life was an example of high dedication. Right from the college life, he became a fulltime RSS Pracharak and continued so till his last breath. It was a life of dedication personified.
Eknathji was a visionary of highest order (a Deerga Darshi). During 1950, when there was an earthquake of very high intensity in the North east region of India and the river Brahmaputra changed its course, resulting in most parts of Assam and nearby areas being inundated under flood waters causing extensive loss of life and property. Eknathji, as the Poorwanchal Pracharak of the RSS had organised massive relief work. During that time Param Poojaneeya Guruji visited that area along with Eknathji to have a first hand report  of the co1losal  loss of life and property. At that time Eknathji had apprised Guruji that the entire North – east region is a melting pot and needs immediate attention. He told Guruji that anti – national forces are working freely  and openly to deface the cultural mosaic of Assam and other Indegenious faiths of  North East areas. He stressed upon Guruji to spread the networking of RSS in those far flung areas. How truthful Eknathji’s assessment of the north east 65 years ago! It is all visible to-day.

Eknathji was a man of high commitment and obedience. When Param Poojaneya Guruji entrusted him with the work of Vivekananda Rock Memorial he readily accepted it even though he never had experience of constructing any memorial or Mandir in the past. For Eknathji it was a “Anjna” the obedience to the hierchey and it was to be followed implicitly.  His obedience was remarkable. His commitment for the given cause was unquestionable.

Eknathji was a good strategist. When he took up the work of Vivekananda Rock Memorial, he had to confront with many problems from various sources. With cool head, and boldness he prioritised the work. He handled the situation very effectively and firmly, while dealing with Prof.  Humayun Kabir, the then Tourism Minister who opposed the very idea of a Vivekananda Rock Memorial, tooth and nail. Eknathji humbled him shrewdly and Prof.  Kabir had to withdraw his opposition.

Similarly he brought all those who were opposing the Vivekananda Memorial in Kanyakumari, by persuasion, and reconciliation to his side. Even, the obstinate Chief Minister of   Tamilnadu  Shri M. Bhaktavalsalam who said that the Vivekananda Rock Memorial in the midsea would never be allowed during his life time had to change his views and toe the line as suggested by Eknathji. Shri Bhaktavalsam became an ardent supporter of Vivekananda Rock Memorial later. The credit goes to Eknathji’s style of handling people occupying even in high position.

Eknathji was a man who believed in hot pursuit. He never left anything for chances or resorted  to causal approach. When Late Shri Lal Bahadur Shastri, asked Eknathji to prepare a memorandum for submitting to Pandit Jawahar Lal Nehru to get his consent for the construction of Vivekananda Rock Memorial at Kanyakumari, duly signed by as many MPs as possible. Eknathji  immediately plunged in the task of getting the signatures of the Members of Parliament  belonging to different political ideologies. His ability for hot pursuit and his persuasive capacity enabled him to get the signatures of 323 MPs within 3 days, fully supporting the need for a befitting memorial to Swami Vivekananda in the midsea at Kanyakumari. This act of Eknathji exhibited high commitment to the given task and his ability to persuade all sections of the people irrespective of what political color they carried.

As a master organiser, Eknathji very capably galvanized a team of highly dedicated and competent people for the erection of Vivekananda Rock Memorial in quick time. The most difficult task under taken by Eknathji in his life time found fruition in a record time of six years. He evolved a unique fund-raising programme whereby he could reach out to even to the common man who also contributed Rs. One and had the fulfillment of owning the great memorial. Thirty lakhs of people contributed Rupees Eighty lakhs and made it a truly National monument. Central and State Governments, Industrialists and businessmen also contributed for this national cause without any reservation.

Eknathji was highly inspired by Swami Vivekananda’s life and message. As a college student he studied Swamiji’s life and got himself fully saturated with his patriotism and love for  Bharatheeya sanskriti. As Swami Vivekananda was the sheet anchor for the Indian freedom movement, Eknathji was always of the view that the great Swamiji’s  message  of love for Bharat should be preached to the younger generation, out of whom the new workers will come like young lions.  He therefore, after the construction of Vivekananda Rock Memorial, immediately engaged himself to spread the message of Swami Vivekananda to the nook and corner of India. His oft-quoted words are “Vivekananda Rock Memorial is only a monument in granite stone to perpetuate  Swamiji’s historic meditation on the divine Rock. Where as the Vivekananda Kendra, a spiritually oriented service mission is a memorial in flesh and blood to carry, His message to the younger generation. Therefore Eknathji started training and deploying young men and women, as Jeevan Vratis (Missionaries) to devote themselves in service activities  and thereby carry the message of selfless service and potential divinity of man as preached by great Swami Vivekananda.

As envisioned earlier, he felt the country’s north-eastern region needs prompt and careful attention,  therefore he gave priority  for that area and deputed a team of Jeevan Vraties to Assam, Arunachal Pradesh, Nagaland, Manipur etc.

Eknathji’s  direction to the  young Jeevan Vratis, who were deputed to North – east region was very clear and straightforward. The people living in those far-flung hilly areas should develop love for the country and therefore their patriotic fervour should be triggered. Giving formal education by setting up a chain of schools in the north-east border areas to give man-making and character-building education was the need of the hour. Kendra, within a decade could set up number of such educational institutions in Assam, Arunachal and Nagaland. Intensive and extensive rural development  programmes along with health and hygiene  work in the interior tribal areas have created a congenial atmosphere for Kendra work.

While taking up all these service activities, Eknathji gave a free hand and timely encouragement to the Kendra workers.

Vivekananda Kendra fulfilled the dream of  Eknathji by setting up an Institute of Culture in Guwahati, Assam to cater to the needs of the North Eastern states, with the soul purpose of  (a) to understand the richness of the traditional systems and  identify the unifying elements that bind us. (b) reflect on how best to provide meaningful continuity to these practices in a fast changing complex life style and (c) give inspiring leadership with the idea of Development through culture.

Another dream of Eknathji was fulfilled when Kendra set up the Vivekananda International Foundation  in Delhi in 2009 as an independent and non – partisan institution that promote quality research and offers a platform for dialogue and conflict resolution.

Few of the programs as dreamt by Eknathji which are yet to be given practical shape are:-
Setting up 12 zonal centres for the training of dedicated workers.

2) Setting up a research Centre on Yoga  Vedanta of International standard in Kanyakumari.

3) Setting up model Educational institutions for girls in all the districts of India.

We are sure by the blessings of the Almighty Kendra will be able to fulfill all the dream projects of Eknathji as early as possible.

With these words I conclude by thanking all of you once again.
Vande Mataram!
Posted by Unknown at 11:00 PM